Three books I wrote were released:

I had readings, signings, & events at:

It’s Not Jack and the Beanstalk was named to the 2018 Wisconsin State Reading Association (WSRA) Picture This Recommendation List.

How to Code a Sandcastle was selected to the 2018 Summer Indie Next List by the American Booksellers Association. 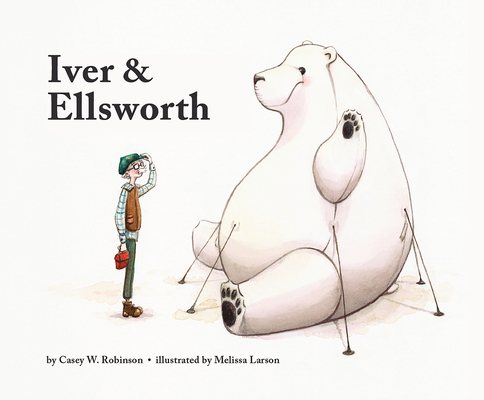 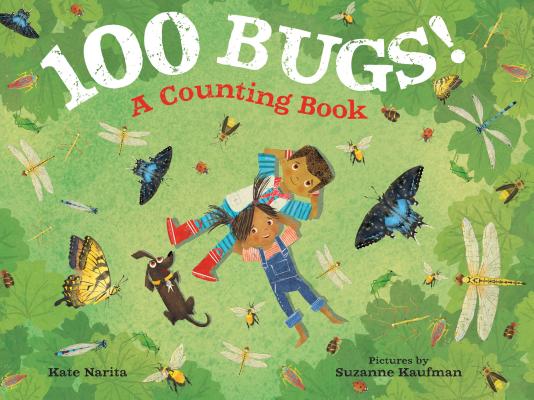 I was interviewed by The Book Doctors in the Huffington Post today in an article entitled “Josh Funk on the War Between Pancakes & French Toast, SCBWI & Getting Published” – it’s probably the most in depth interview I’ve done to date, with some seriously awesome questions, such as:

And I got to share the #TeamKrush logo designed by Jessie Devine.

Check out the entire interview here.

Want a backhoe for a pet? Of course you do!

2. There Was a Wee Lassie Who Swallowed a Midgie written by Rebecca Colby and illustrated by Kate McLelland

A Scottish twist on this much-loved rhyme!

I spent last Monday and Tuesday at nErDcamp in Michigan. What is nErDcamp? It’s a conference for educators focused on reading and literacy founded by members of the Nerdy Book Club (if you don’t know what that is, stop reading this and go here now). Over 900 educators from all over the U.S. and Canada attended the two day conference.

So let me tell you what happened with pictures.

Sunday morning I flew from Boston to Detroit.

After chilling at the airport for a bit, I hitched a ride with educators Lesley Burnap, Jason Lewis, and Debbie Ridpath Ohi (author/illustrator of Where Are My Books?, illustrator of I’m Bored and Naked – two separate books). We stopped at Bob’s Big Boy for a snack on the way from Detroit to the Hampton Inn in Jackson.

After checking in at the hotel, we met up with my good friend Jess Keating (author of How to Outrun a Crocodile When Your Shoes are Untied, How to Outswim a Shark without a Snorkel, this October’s How to Outfox Your Friends When You Don’t Have a Clue, and next February’s Pink Is for Blobfish, AND member of #TeamKrush) and her husband who shall henceforth be referred to as #NerdyPhotographer. Along with Debbie, we headed over to the high school where nErDcamp would take place starting the next day. We stopped by the rock for this photo:

Then we headed into the school

where I dropped off some swag,

and a little more swag,

and offered (Jess and Debie) to help.

While hanging out in the Hampton Inn ‘bar’ for the evening, I shared Lady Pancake & Sir French Toast with several new friends who hadn’t seen it before. I also took the opportunity to share Dear Dragon and Pirasaurs! sketches, and it was a blast to see these readers’ reactions. And then I went to bed…

only to be woken up at 6:30 by the fire alarm which quickly shut off. When it came back on for the second time three minutes later, I headed to the lobby to check it out and it (apparently it was a malfunction), but I stayed to eat breakfast, only to receive this at 7:17:

I wonder if it was @joshfunkbooks that pulled the fire alarm at the Hampton Inn. #nerdcampmi

Followed by the #joshdidit hashtag starting to trend (for the record, I didn’t do it). While the alarms continued to blare on and off (until about 8:30), I split a waffle with Debbie,

and I had a nice chat with debut author Cassie Beasley (Circus Mirandus).

We arrived at nErDcamp and headed to the ‘Green Room’ for presenters where everyone had a fantastic gift bag filled with homemade boutonnieres that Mrs. Sharp made out of an old Robinson Crusoe text, along with a bunch of other great stuff. I met several awesome authors over the next few hours including authors Edith Cohn (Spirit’s Key), Kristen Kittscher (The Wig in the Window), Tracy Holzer (The Secret Hum of a Daisy), Erin Soderberg (The Quirks, Puppy Pirates), Aaron Zenz (Chuckling Ducklings), Ruth McNally Barshaw (Ellie McDoodle Diaries), Louise Borden (Baseball Is …), Leisl Shurtliff (Rump, Jack), Laurie Keller (Arnie the Doughnut), Tricia Springstubb (Cody and the Fountain of Happiness),  Jerzy Drozd (Warren Commission Report), Lisa Graff (A Tangle of Knots), Lauren Castillo (Nana in the City), Philip C. Stead (Jonathan and the Big Blue Boat), Erin E. Stead (A Sick Day for Amos McGee), Matthew Cordell (Wish).

Yeah, I managed to sneak into a picture with a few of these all-stars! Nearly 1,000 people filled the auditorium

and this awesome 8 minutes from Pernille Ripp,

[Photo by Aliza Werner twitter.com/alizateach]
And there I am standing at the edge of Debbie’s view from between the pair of Team Caldecott:

Felt honored to be on Picture Bk panel with so many talented authors/illus! #nErDcampMI pic.twitter.com/IG70yaBdRP

What a thrill it was to lead this panel with such a stellar cast! And it went very well! Everyone got a chance to speak, and we even had a few laughs (I think it was with me, not at me…).

After session 2, I went to see Mr. Schu talk about his favorite books of the year so far. He started with picture books, and had so many on his list, he got as far as … some of the picture books (sorry Non-Fiction, Middle Grade, Graphic Novels).

So this post is taking forever to write, and I’ll bet almost nobody is actually reading this far, and it’s Saturday night, and my wife wants to spend some time with me (yay! she loves me!), so I think I’ll just post some pictures with captions for the rest of the way.

So, all in all, nErDcamp was amazing. I met so many awesome educators and authors and friends.

I’ll end with this tweet (you may recognize one of the images):

See you next summer!

Yesterday I updated my official website (joshfunkbooks.com) to include a new Resources for Writers section. 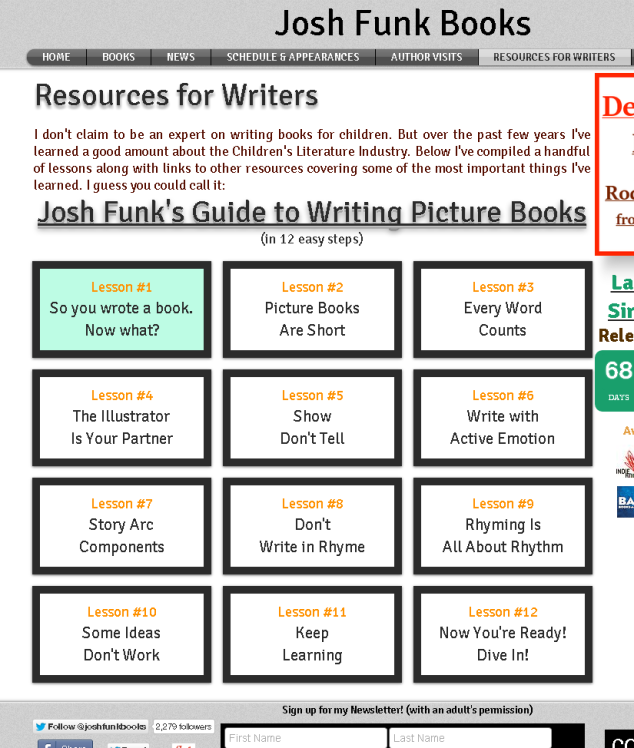 For those of you that have been following this blog for a while, those 12 lessons may look familiar. I took my Tips for Writing Picture Books series and reorganized it a bit to make it a little cleaner and available all in one place.

I hope that these lessons help any prospective picture book authors, as it’s basically a massive brain dump of things I’ve learned in the last ~4 years.

I’ve been to New York City before. Many times, actually. With my parents. On school trips. With friends. Twice in college to see Conan. With my wife. But I realized as I got off the train at Penn Station on Monday afternoon that I had never been in New York City alone. It strangely felt like I’d never been before. And I’ve certainly never had an experience quite like the past few days.

What happens at a sales conference, you ask? This is where the Editorial, Publicity, and Marketing departments of the Publisher reveal the upcoming season’s list of books to the Sales Representatives who will then try to sell those books to bookstores around the U.S. and Canada. And let me tell you, Sterling’s Fall list looks awesome (and I’m not just saying that cause I wrote one of the books on it).

Why was I invited, you might still be wondering? Sterling thought I could get the sales reps excited about LADY PANCAKE & SIR FRENCH TOAST.

After a quick breakfast and some remarks by the editorial director, my editor introduced me with some very kind words. I shared a sneak peak of the book trailer (coming soon, I promise, Mr. Schu), and talked a bit about the book and what some of my marketing/promotional plans might be. And then I got a sneak peak of everything else Sterling is offering this Summer & Fall.

At the end of the day, everyone went out for done fancy cocktails (I got a Shirley Temple, just like my editor). At a luxurious dinner (where I should note there were zero children), I got a chance to chat with many of the sales folks, about breakfast foods, kids books, and everything else. I met Jeff Anderson, author of the forthcoming middle grade from Sterling, ZACK DELACRUZ: ME AND MY BIG MOUTH. And got to hang out with many of the the other book creators on the Sterling team.

But the remarkable thing was that people treated me like I was something special. In all seriousness, this was strange. A good strange, but I never thought anything I would do or say would be worth paying attention to.

(I mean I think everything I do and say is worth paying attention to, but until now, nobody else ever seemed to feel that way).

I keep thinking how fortunate I am to have found perfect homes for three of my manuscripts, connected with a great agent, and made all these friends along the way. This whole ride just seems so surreal. But I’m not saying I’d trade it in.

It’s strange, and might even be crazy. But it’s crazy awesome. 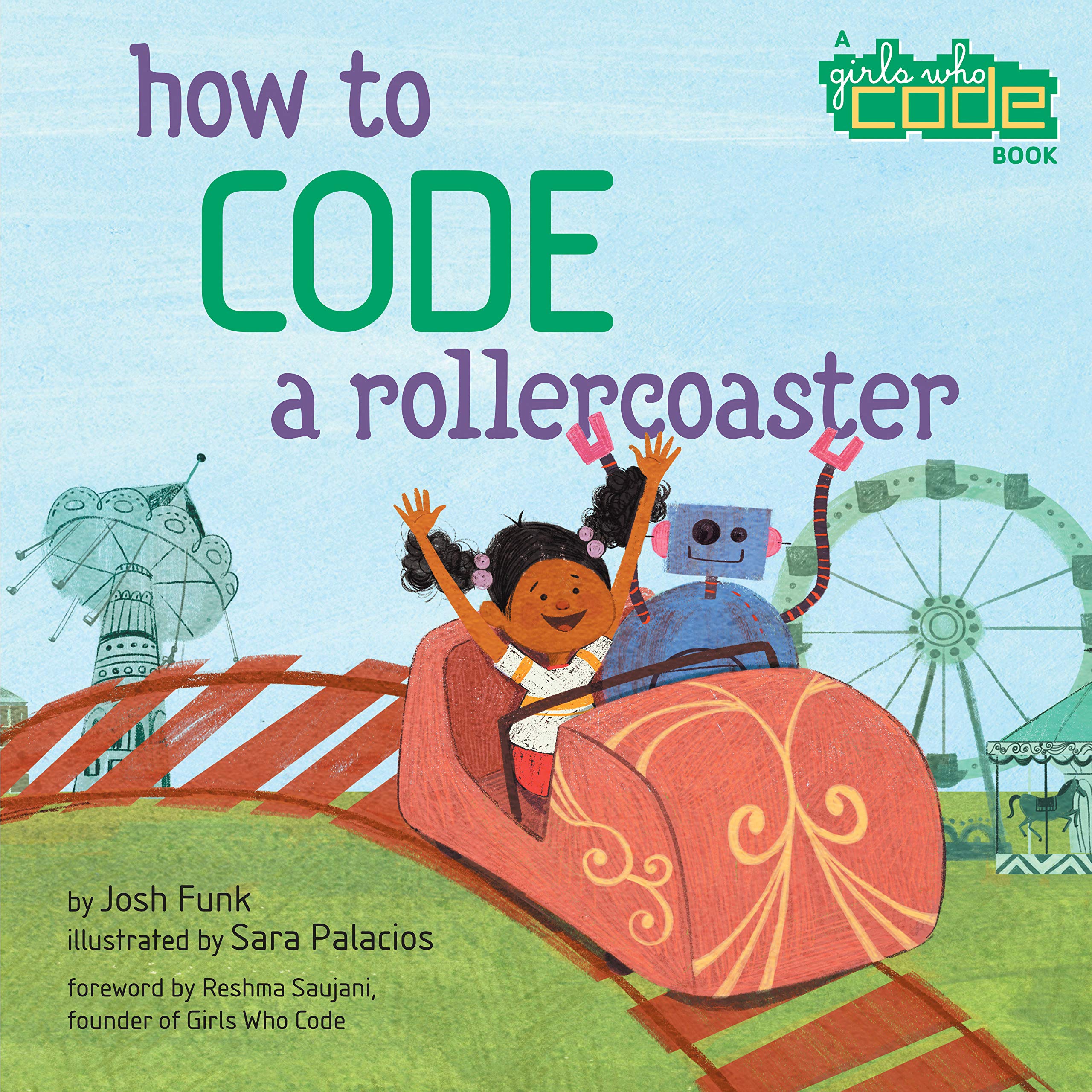 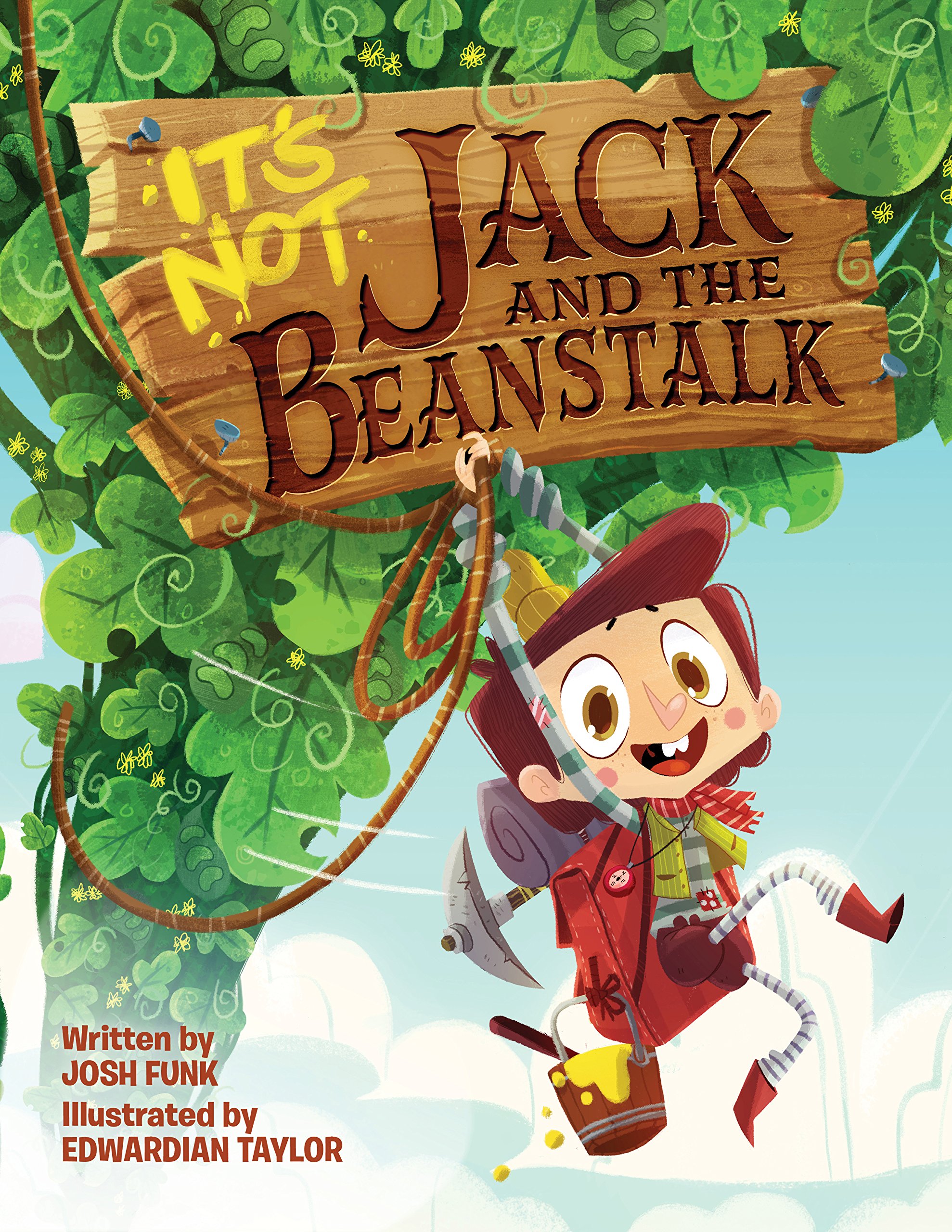 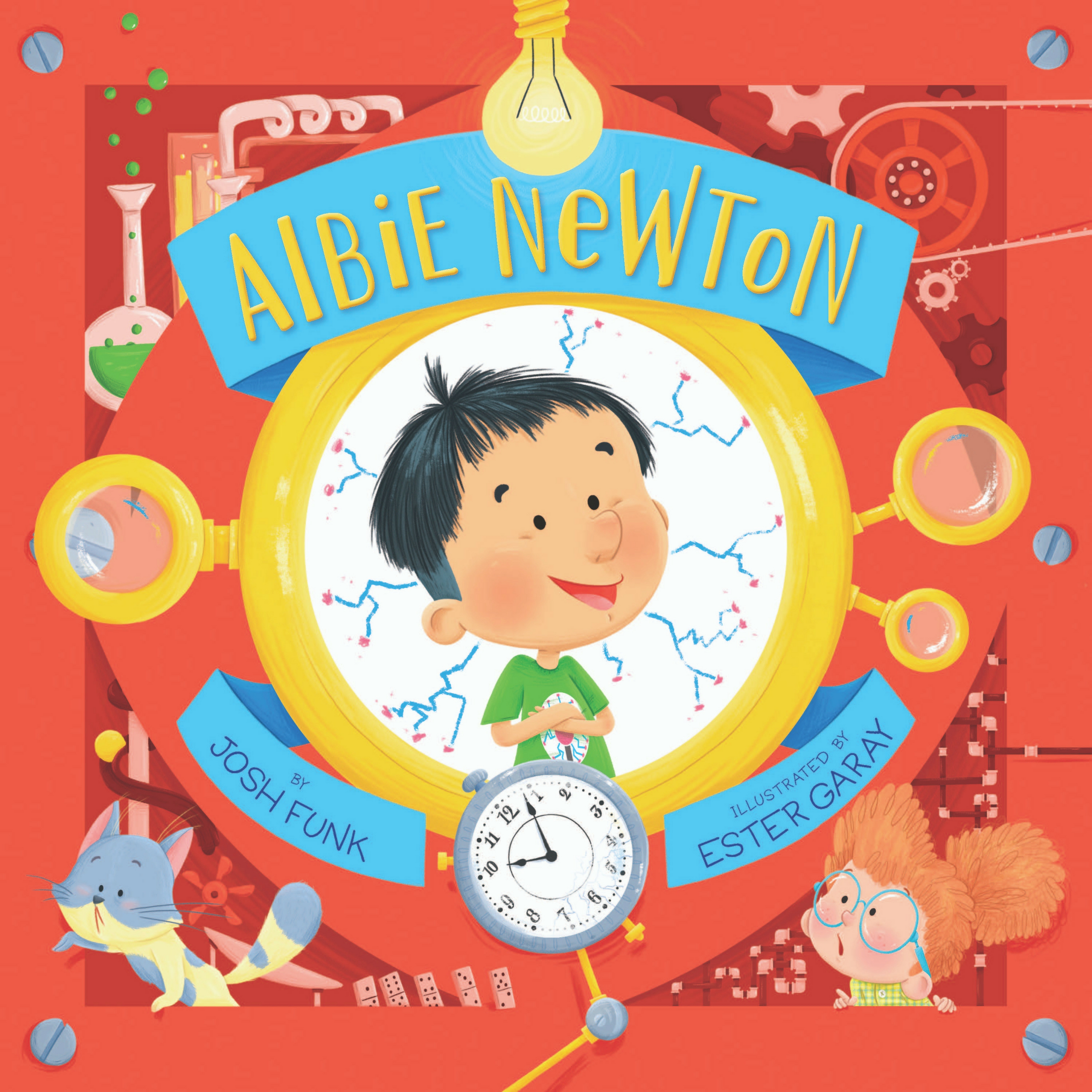